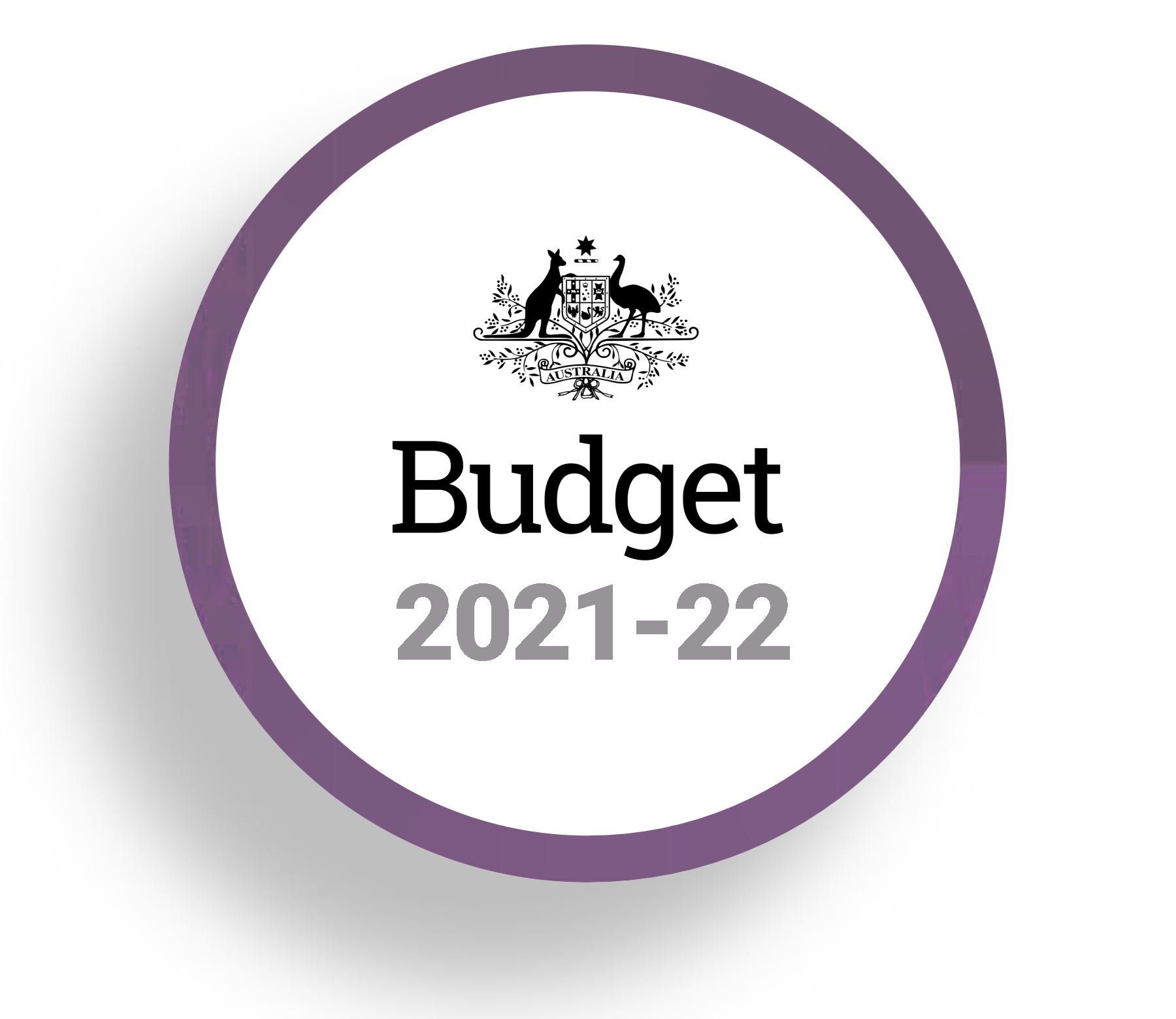 We are pleased to share a summary of announcements made in the 2021/22 Federal Budget. If you have any questions about how these changes relate to your personal situation or require any assistance, please don’t hesitate to contact our office.

The Government has announced that it will retain the LMITO for one more income year, so that it will still be available for the 2022 income year. Under current legislation, the LMITO was due to be removed from 1 July 2021. The LMITO is a non-refundable tax offset that provides tax relief for low and middle-income taxpayers and is available in addition to the Low Income Tax Offset ('LITO'). The LMITO is proposed to apply as follows for the 2022 income year.

Consistent with current arrangements, the LMITO will be applied to reduce the tax payable by individuals when they lodge their tax returns for the 2022 income year.

The Government will increase the Medicare levy low-income thresholds for singles, families and seniors and pensioners for the 2021 income year, as follows:

For each dependent child or student, the family income thresholds increase by a further $3,597, up from the previous amount of $3,533.

The Government has announced that it will replace the individual tax residency rules with a new, modernised framework. The primary test will be a simple 'bright line' test - a person who is physically present in Australia for 183 days or more in any income year will be an Australian tax resident.

Individuals who do not meet the primary test will be subject to secondary tests that depend on a combination of physical presence and measurable, objective criteria. Australia's current tax residency rules are difficult to apply in practice, creating uncertainty and resulting in high compliance costs for individuals and their employers.

The new framework is based on recommendations made by the Board of Taxation in its 2019 report to the Government, 'Reforming individual tax residency rules - a model for modernisation'. According to the Government, this new framework will be easier to understand and apply in practice, deliver greater certainty, and lower compliance costs for globally mobile individuals and their employers. This measure will have effect from the first income year after the date of Royal Assent of the enabling legislation.

The Government will remove the exclusion of the first $250 of deductions for prescribed courses of education. Currently, the first $250 of a prescribed course of education expense is not tax deductible. Removing this $250 exclusion is expected to reduce compliance costs for individuals claiming self­education expense deductions. This measure will have effect from the first income year after the date of Royal Assent of the enabling legislation.

The Government will remove the 'cessation of employment' taxing point for tax-deferred Employee Share Schemes ('ESS') that are available for all companies. This change will apply to ESS interests issued from the first income year after the date of Royal Assent of the enabling legislation. Currently, under a tax-deferred ESS, where certain criteria are met, employees may defer tax until a later tax year ('the deferred taxing point'). The deferred taxing point is the earliest of:

(a) cessation of employment;
(b) in the case of shares, when there is no risk of forfeiture and no restrictions on disposal;
(c) in the case of options, when the employee exercises the option and there is no risk of forfeiting the resulting share and no restriction on disposal; and
(d) the maximum period of deferral of 15 years.
This change will remove the 'cessation of employment' taxing point (i.e., point (a) above) and result in tax being deferred until the earliest of the remaining taxing points (i.e., points (b) to (d) above). In addition to this change, the Government will also reduce red tape for ESS:

This measure aims to help Australian companies to engage and retain the talent they need to compete on a global stage, consistent with recommendations from the Global Business and Talent Attraction.

1.6 Exemption for pay and allowances for Operation Paladin

This measure ensures that personnel are subject to consistent tax treatment regardless of the operational area of Operation Paladin to which they are deployed. The exemption will apply from 1 July 2020 (i.e., from the 2021 income year).

In the prior year (2020/21) Federal Budget, the Government announced amendments to allow businesses with an aggregated turnover of less than $5 billion to access a new temporary full expensing of eligible depreciating assets until 30 June 2022. Temporary full expensing became law when Treasury Laws Amendment (A Tax Plan for the COVID-19 Economic Recovery) Bill 2020 received Royal Assent on 14 October 2020.

In the 2021/22 Federal Budget, the Government has announced that temporary full expensing will be extended by 12 months to allow eligible businesses with aggregated annual turnover or total income of less than $5 billion to deduct the full cost of eligible depreciable assets of any value, acquired from 7:30pm AEDT on 6 October 2020 and first used or installed ready for use by 30 June 2023. All other elements of temporary full expensing will remain unchanged, including the alternative eligibility test based on total income, which will continue to be available to businesses.

In the prior year (2020/21) Federal Budget, the Government announced amendments to introduce a temporary loss carry-back measure. Broadly, this initial measure allowed 'corporate tax entities' with an aggregated turnover of less than $5 billion to carry back tax losses made in the 2020, 2021 and/or 2022 income years to claim a refund of tax paid (by way of a tax offset) in relation to the 2019, 2020 and/or 2021 income years. The rules relating to the temporary loss carry-back regime have been enacted and are contained in Division 160 of the IT AA 1997.

In the 2021/22 Federal Budget, the Government has announced that the loss carry-back measure will be extended to allow eligible companies (i.e., with aggregated turnover of less than $5 billion) to also carry back (utilise) tax losses from the 2023 income year to offset previously taxed profits as far back as the 2019 income year when they lodge their tax return for the 2023 income year.

Consistent with the current law, the tax refund available under this measure is limited by requiring that the amount carried back is not more than the earlier taxed profits and does not generate a franking account deficit. Companies that do not elect to carry back losses under this measure can still carry losses forward as normal.

(a) The Government will allow taxpayers to self-assess the tax effective lives of eligible intangible depreciating assets, such as patents, registered designs, copyrights and in-house software. This measure will apply to assets acquired from 1 July 2023, after the temporary full expensing regime has concluded.
The tax effective lives of such assets are currently set by statute. Allowing taxpayers to self­assess the tax effective life of an asset will allow for a better alignment of tax outcomes with the underlying economic benefits provided by the asset. It will also align the tax treatment of these assets with that of most tangible assets.
Taxpayers will continue to have the option of applying the existing statutory effective life to depreciate these assets.
(b) The Government will provide $18.8 million over four years from 2022 for a Digital Games Tax Offset to provide a 30% refundable tax offset for qualifying Australian digital games expenditure ongoing from 1 July 2022, with the criteria and definition of qualifying expenditure to be determined through industry consultation.
(c) The Government will provide $200.1 million over two years from the 2022 income year to develop and transition government services to a new, enhanced myGov platform, providing a central place for Australians to find information and services online.

The Government has announced that it will allow small business entities (including individuals carrying on a business) with an aggregated turnover of less than $10 million per year to apply to the Small Business Taxation Division of the Administrative Appeals Tribunal (the 'Tribunal') to pause or modify ATO debt recovery actions, such as garnishee notices and the recovery of general interest charge or related penalties, where the debt is being disputed in the Tribunal.
Currently, small businesses are only able to pause or modify ATO debt recovery actions through the court system, which can be costly and time consuming. It is expected that applying to the Tribunal instead of the courts will save small businesses at least several thousands of dollars in court and legal fees and as much as 60 days of waiting for a decision.
These new powers for the Tribunal will be available in respect of proceedings commenced on or after the date of Royal Assent of the enabling legislation.

The Government will provide an income tax exemption for qualifying grants made to primary producers and small businesses affected by the storms and floods in Australia.
Qualifying grants are Category D grants provided under the Disaster Recovery Funding Arrangements 2018, where those grants relate to the storms and floods in Australia that occurred due to rainfall events between 19 February 2021 and 31 March 2021. These include small business recovery grants of up to $50,000 and primary producer recovery grants of up to $75,000. The grants will be made non-assessable non-exempt income for tax purposes.

3.3 Removing the $450 per month threshold for Superannuation Guarantee ('SG') eligibility

The Government will remove the current $450 per month minimum income threshold, under which employees do not have to be paid SG contributions by their employer.
The measure will have effect from the start of the first income year after Royal Assent of the enabling legislation, which the Government expects to have occurred prior to 1 July 2022.

The Government will relax residency requirements for SMSFs and small APRA-regulated funds by:

The measure will have effect from the start of the first income year after Royal Assent of the enabling legislation, which the Government expects to have occurred prior to 1 July 2022.

This measure will allow SMSF members and small APRA fund members to continue to contribute to their superannuation fund whilst temporarily overseas, ensuring parity with members of large APRA regulated funds.

The Government has announced that it will allow individuals the temporary option to exit and convert from a specified range of legacy retirement products (together with any associated reserves) into more flexible and contemporary retirement products, for a two-year period.

The products covered by this measure include market-linked, life-expectancy and lifetime products that were first commenced before 20 September 2007 from any provider (including an SMSF), but not flexi-pension products or a lifetime product in a large APRA-regulated or public sector defined benefit scheme.

The measure will have effect from the first income year after the date of Royal Assent of the enabling legislation.

Currently, these products can only be converted into another like product and limits apply to the allocation of any associated reserves without counting towards an individual's contribution caps.

This measure will permit full access to all of the product's underlying capital, including any reserves, as part of transitioning into a more flexible and contemporary retirement product.

Social security and taxation treatment will not be grandfathered for any new products commenced with commuted funds, and the commuted reserves will be taxed as an assessable contribution.

The Government has announced that it will make the following changes to the FHSS scheme.

The Government will increase the maximum releasable amount of voluntary concessional and non­concessional contributions under the FHSS scheme from $30,000 to $50,000, to assist first home buyers in raising a deposit more quickly.

Voluntary contributions made from 1 July 2017 up to the existing limit of $15,000 per year will count towards the total amount able to be released.

This change will apply from the start of the first income year after Royal Assent of the enabling legislation, which the Government expects will have occurred by 1 July 2022.

3.6.2 Changes to improve the operation of the FHSS scheme

The Government will make four technical changes to the legislation underpinning the FHSS scheme to improve its operation as well as the experience of first home buyers using the scheme. These four changes will apply retrospectively from 1 July 2018, and will assist FHSS scheme applicants who make errors on their FHSS scheme release applications by:

Working from home? Here’s what you can claim